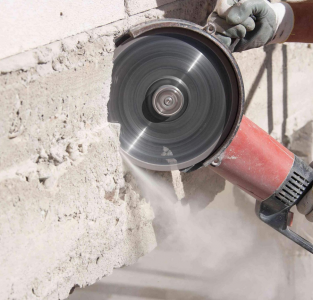 Commonly used diamond particle sizes are in the range of 30/35 to 60/80. The harder the rock, the finer grain size should be selected. Because under the same pressure conditions, the finer and sharper the diamond is, which is conducive to cutting into hard rocks.

In addition, generally diamond saw blade factory require large-diameter Diamond blades high sawing efficiency, and a coarser particle size should be selected, such as 30/40, 40/50; small-diameter diamond cut blades have low sawing efficiency, requiring smooth rock sawing section, and should use a finer granularity, such as 50/60, 60/80.

In the process of cutting stone by , the diamond blade will be subjected to alternating loads such as centrifugal force, sawing force, and sawing heat.

Grinding and breakage of diamond circular saw blades due to force and temperature effects.

During the sawing process, the saw blade is subjected to the action of axial force and tangential force. Due to the force in the circumferential and radial directions, the saw blade is wavy in the axial direction and dish-shaped in the radial direction. These two kinds of deformation will cause uneven rock section, waste of stone material, loud noise and intensified vibration during sawing, resulting in early damage of diamond agglomeration and shortening of saw blade life.

The traditional theory holds that the effect of temperature on the saw blade process is mainly manifested in two aspects: one is to cause the graphitization of diamond in the agglomeration; the other is to cause the thermal stress between the diamond and the matrix, which causes the diamond particles to fall off prematurely. New research shows that the heat generated during the cutting process is mainly transferred to the agglomerates. The arc zone temperature is not high, generally between 40 and 120 °C. The abrasive grinding point temperature is relatively high, generally between 250 ~ 700 ℃. The coolant only reduces the average temperature of the arc zone, but has little effect on the temperature of the abrasive particles. Such a temperature will not cause carbonization of graphite, but will change the friction properties between the abrasive particles and the workpiece, and cause thermal stress between the diamond and the additive, resulting in a fundamental change in the failure mechanism of diamond. Studies have shown that temperature effects are a large factor in breaking saw blades.

Due to the force effect and temperature, the saw blade often suffers from wear and tear after a period of use. The main forms of abrasion damage are as follows: abrasive wear, local crushing, large-scale crushing, falling off, and mechanical abrasion of the binder along the direction of the sawing speed.

The particles are constantly shaken in the binder to loosen. At the same time, the wear of the bond itself during sawing and the heat of sawing soften the bond. This reduces the holding force of the bond, and when the cutting force on the particles is greater than the holding force, the diamond particles will fall off. Either type of wear is closely related to the load and temperature to which the diamond particles are subjected. Both of these depend on the sawing process and cooling and lubrication conditions.

All diamond saw blades manufacturer should establish confidence, increase investment in science and technology, and make continuous improvement and innovation of products to adapt to the development of the market and create more brilliant performance. If you still have question, please contact BSP–diamond grinder blade suppliers. If you are interested in diamond tools, please join us.